Ever since I got pregnant with my Little Bug, I have been somewhat obsessed with the entire process of pregnancy, labor, and birth. True story. As any birth junkie can attest to, once you get bitten by the birth bug, you never lose that fascination.

And despite my own rocky history with pregnancy, I too remain fascinated. I read every pregnancy birth I can get my hands on, sometimes reviewing newly-released ones for SF Book Review. I love talking pregnancy with my friends. I celebrate their pregnancies and revel in their birth stories. I read articles and blog posts and never, never stop learning. 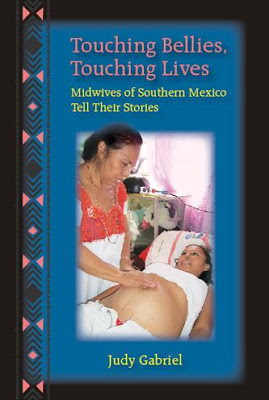 I know I'm not alone in my obsession. And for people who love birth as much as I do, getting to read a book like Touching Bellies, Touching Lives by Judy Gabriel is a real treat.

Gabriel fell in love with Mexico at a fairly young age. Later, as an adult, she spent weeks and months at a time traveling through the southern parts of Mexico, meeting with traditional midwives and hearing their stories. Her book gives voice to a group of people that is in danger of disappearing completely, as Mexico adopts the worst of Western practices regarding how labor and birth should be "managed."

Many of us are already well aware of the problems that pregnant women face in America; the over-medicalization of normal, healthy, low-risk pregnancies has been getting plenty of media attention in recent years, including on some rather prominent news sites. We know that interventions are over-used, that the cesarean rate is too high, and that birth trauma is a very real issue.

But what we hear less about is how some of these problems are sneaking into other countries and cultures. Touching Bellies, Touching Lives has opened my eyes in a lot of ways. I hadn't realized that midwifery in Mexico is currently facing the same challenges that midwifery in the United States faced decades ago, that mistrust and lies are driving women away from traditional care and into hospitals. I hadn't realized that the use of pitocin (artificial oxytocin, which is the primary hormone that drives contractions during labor) had become so standardized, that even many midwives used pitocin routinely now and that pregnant women asked for it. I hadn't realized that in the hospitals in Mexico, the cesarean rate not only rivals that of the U.S., but in some places surpasses it (the book quotes 45% overall in Mexico, with some private hospitals having rates as high as 90%).

However, the heart of Touching Bellies, Touching Lives lies in Gabriel's interviews with dozens and dozens of traditional midwives throughout the region. There are so many stories scattered throughout the pages of this relatively small book, stories where women tell of how they became midwives in the first place, where they learned the skills they use to care for pregnant women, and some of the more memorable births they attended. These midwives tell of learning their practice from established midwives and local healers, of attending cursos (government-sponsored courses in midwifery), and of the way their practices have evolved over time.

Many of the midwives feel deeply drawn to midwifery by God; many described it as a calling of sorts, and many said they became midwives because there was no one else in the area to help laboring women give birth. They talk about using the rebozo (a long, wide scarf) to help reposition babies and ease labor pains, about traditional remedies for pregnancy and labor, and the value of regular belly massage throughout pregnancy. In fact, one of Gabriel's primary methods of locating midwives was to ask about women who massage the bellies of pregnant women!

Touching Bellies, Touching Lives is a fantastic and informative read. While it will appeal most strongly to those already interested in pregnancy, labor, and birth, readers of all kinds will be able to see interesting parallels between the over-medicalization of childbirth in the U.S. and similar trends in Mexico. Gabriel's passion for midwifery is clear in every page of this delightful book, which is a true pleasure to read.

I received a free copy of this book from the author in exchange for an honest review. All opinions expressed are my own!